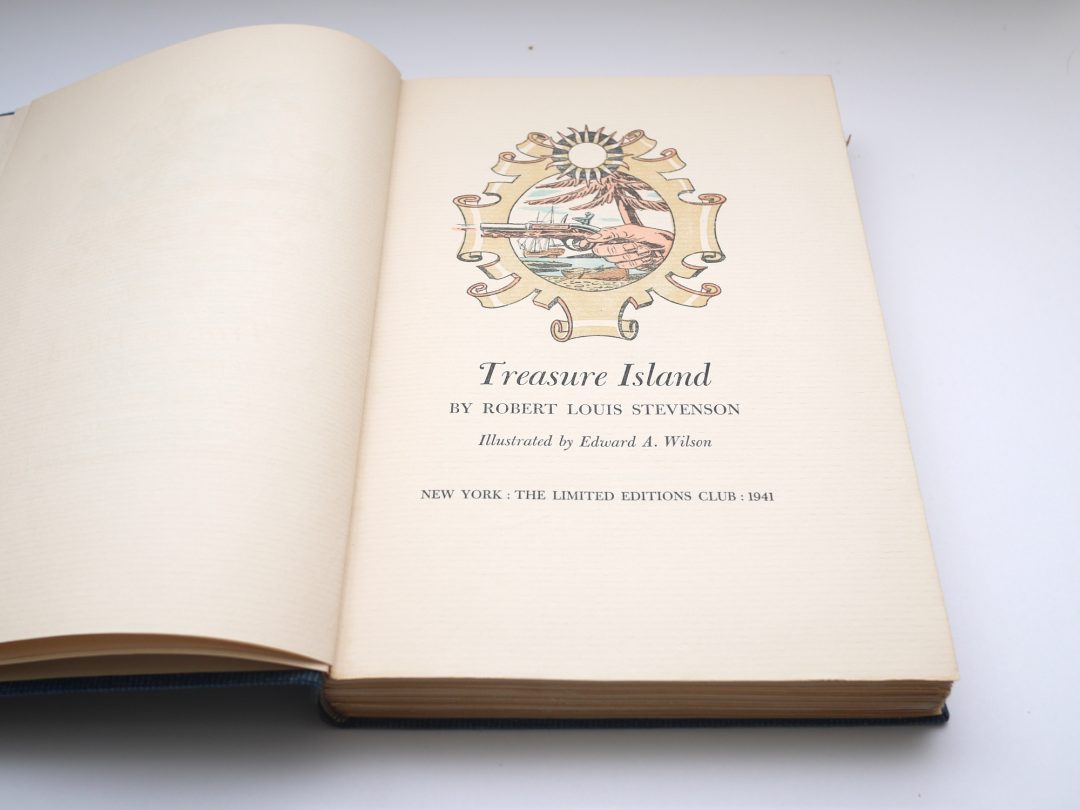 There’s not much that can be said of Treasure Island that hasn’t been said before. I think every young boy in the English-speaking world must have read Robert Louis Stevenson’s classic in some form of the other while growing up. My first experience occurred in primary school while reading a comprehension book called “I Find Out.” The I Find Out series of books each featured a few paragraphs from classic English books followed by questions that tested your understanding of what was happening. Being written in first person, it was a bit difficult for me to get into at first, but I do remember it eventually being fun.

I also read the illustrated classics version, a much-abridged version that was also for children, but I can’t remember ever reading the complete text, so I’m looking forward to reading it in this lovely edition sometime.

About the illustrator – Edward A. Wilson

This edition was published in 1941 and is illustrated by Edward A. Wilson. The monthly newsletter mentions that he was one of the first illustrators that The Limited Editions Club approached to produce artwork for their books. The following quotations are from the Heritage Press Sandglass Companion Book: 1960–1983, compiled by Michael C. Bussacco.

Twelve years ago, its directors were frantically making the preliminary arrangements for the first year’s publications of The Limited Editions Club. One of them traveled to Jackson Heights, a suburb of New York, to visit the studio of Edward A. Wilson. Even at that time, Mr. Wilson was known as one of the best of America’s graphic artists, and the job was to persuade him to illustrate one of our books in The Limited Editions Club’s First Series.

It turns out that another publisher was also preparing an illustrated edition of Treasure Island so George Macy decided to put off his own and instead had Wilson illustrate Robinson Crusoe in 1930. After a decade, during which he illustrated other books for the Club, Macy approached him to illustrate another book and Wilson insisted that it be Treasure Island.

Edward A. Wilson had not been brooding over the illustration of Treasure Island for most of his adult life, only in order to make a dozen illustrations. He read the Stevenson story over and over. Each time he read it, he saw a new place in the story which demanded a picture. once he started making pictures, he got into the swing of it; in a few months, he was in the groove. By the time he came back down to earth from that celestial abode happily inhabited by artists lucky enough to be engaged upon the crowning of their careers, he had made sixty-three illustrations.

When he delivered these illustrations, and we began to talk ungraciously about the cost of making color-plates in order that so many illustrations might be reproduced, he told us that we should consider ourselves lucky: for he had had to restrain himself form doing more than a hundred illustrations!

As explained above, illustrations in this edition abound, and they’re all lovely. I haven’t seen much of Wilson’s other work, but it’s easy to see why Macy went back to him repeatedly through the years.

The copy that I have has unfortunately seen fading along the spine due to exposure, but it’s not surprising considering that the book is over seventy years old. I’m also not a fan of the binding, which can’t quite seem to decide if it’s really a hardcover or softcover, and lies somewhere in between.

That quibble aside, this is an attractive edition of Treasure Island that I’m happy to have as part of my library.