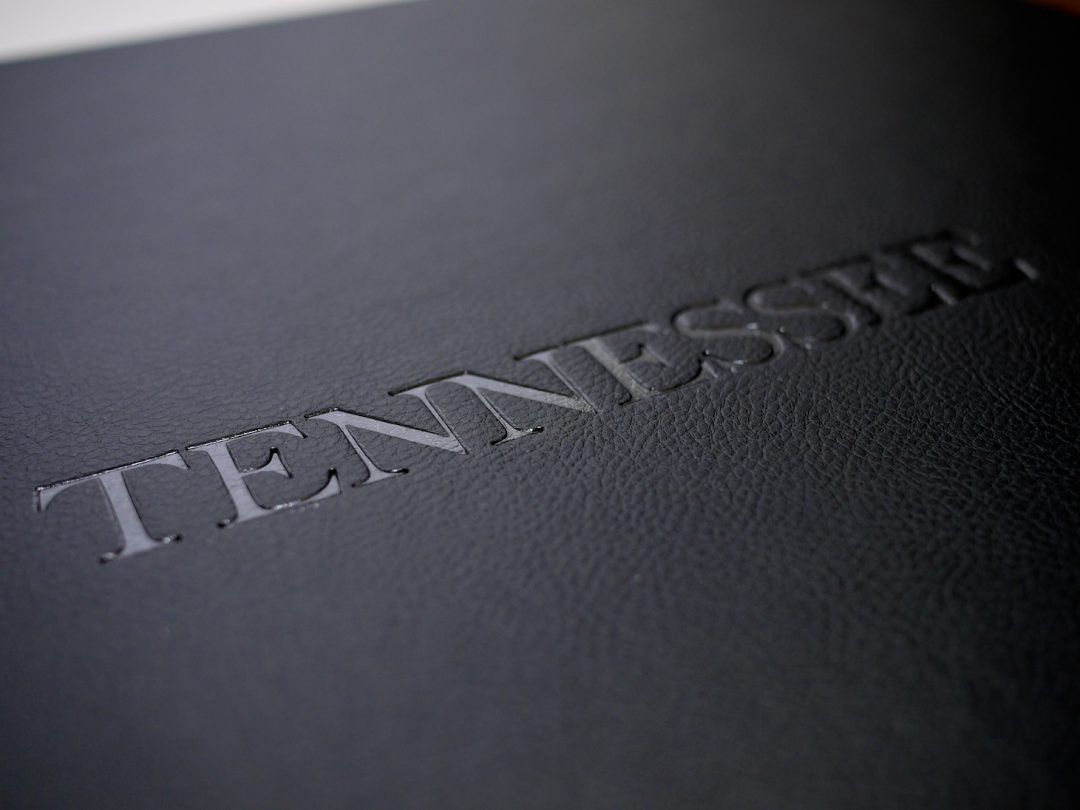 Tennessee is a limited edition, four-color letterpress collection of three of Tennessee Williams’ plays: These Are The Stairs You Got To Watch, Cat On A Hot Tin Roof and The Glass Menagerie. The production was undertaken in celebration of the Shakespeare Theatre’s production of “Five by Tenn,” five one-act plays by Tennessee Williams at the John F. Kennedy Center for the Performing Arts in Washington, DC in 2004 and it’s published by DBS Publications. DBS is no stranger to The Book Blog, having been featured here before with Three Miles from Providence.

Much has been said and written of the two more popular plays in this collection, so I’ll be focusing on These Are The Stairs You Got To Watch in this review.

These Are The Stairs You Got To Watch

These Are The Stairs You Got To Watch is a short, one-act play about an inexperienced sixteen-year-old boy’s first day as an usher at the decrepit Joy Rio cinema. It was first performed by the Shakespeare Theatre in April 2004 at the Kennedy Center in Washington D.C., and this edition is the first time that it has appeared in print. It was directed by Michael Kahn, who also provides a preface.

Like many of Tennessee Williams’ other works, his own experiences work their way into the story: the boy is an aspiring poet whose father considers him lazy for spending his summers writing poetry instead of finding a proper job, echoing Williams’ father’s disappointment in a son who spent his time typing away at a typewriter and composing poems instead of playing outside with other boys his own age. At one point, Williams himself also worked as an usher at the Strand Theatre on Broadway.

This isn’t the first time that the Joy Rio theatre appears in Williams’ works, having played a central role in both Mysteries of the Joy Rio (1941) and Hard Candy (1953), though Stairs is more light-hearted and only touches on the themes of homosexuality and loneliness that pervade those two stories.

The play focuses on the boy’s first day at work where his job is explained to him by an experienced usher named Carl: prevent patrons from accessing the stairs to the upper galleries, where, we understand, fornication happens. A girl manages to sneak by while Carl and the boy aren’t paying attention, spilling some popcorn on the floor. Soon after, the manager of the Joy Rio, Mr. Kroger, appears and begins to chastise Carl for not doing his job. An argument ensues, and Carl begins to vent his frustrations that have piled up over the last ten years, essentially accusing Mr. Kroger of abuse and homosexuality. Carl eventually burns his uniform in a gesture meant to symbolically end his ties with the Joy Rio and is led away by the police.

The boy is left alone and decides to leave before he’s fired, but is, in the end, agonizingly tempted by Gladys who goes up the stairs and invites him to join her. We can tell that he’s about to lose his innocence, like so many others have in the gallery above. Moschovakis and Roessel make the observation in Mister Paradise: And Other One-Act Plays that “…in Williams’ own poem, ‘The Dangerous Painters,’ the most disturbing artwork is that which can only be found at the top of a flight of stairs:

I told him about the galleries upstairs,
the gilt and velour insulation of dangerous painters.

We feel instinctively that the poems of the young usher will improve, once he makes the decision to go upstairs…”

About this Edition of the plays

The plays in Tennessee are housed in a solander box with a soft, black, matte finish and the word ‘Tennessee’ stamped on the front while the interior is lined with dark suede luxe for a soft finish. The inside cover of the box has an enclosure that keeps three additional prints of other Tennessee Williams characters, while the other side contains the three volumes.

Each volume is 18″ x 14″, and together, they’re quite heavy and sturdy. The binding has a dark, matte finish, with the titles being mostly glossy but with bits of coloured highlights. Overall, a very sophisticated look, if a bit hard to keep free of lint.

Tennessee was printed in Florence, Italy by Paolo Barbieri of Paolo Barbieri Tipografo, a part of the Gruppo Barbieri. The Barbieri family has a long history in the service of art in Florence, and today the group specializes in paper-making, hot metal foil stamping, engraving, embossing, lithography and letterpress printing.

The type is handset in the wonderful Baskerville, the transitional serif typeface designed in 1757 by John Baskerville as an improvement over the old style of Caslon, and is crisp and easy to read. It’s printed on the thick, cellulose-made, acid-free Rusticus paper, from Fabriano in Italy, which allows the tactile nature of letterpress printing to really shine through. Running your hand over the pages and feeling the distinctive impression made by the metal type is a delight, something that’s not always the case with letterpress printed works. Each book is also printed in multiple colors, which contributes to an enhanced reading experience.

About the artist – Clarice Smith

Clarice Smith is an internationally known artist who has exhibited her paintings all over the world; more information’s available on her website. This is the second book that’s been reviewed here that features her work, the other being Three Miles from Providence, though much more of her artistic ability is on display here.

Each piece was hand-drawn in pencil to begin with, and then coloured to suit the personalities of each woman. The prints were created by colour separation over the course of several days to ensure that they match the original as much as possible. The series, “Tennessee’s Women,” consists of the following characters, with the first three bound into their respective books:

I haven’t read Summer and Smoke, A Streetcar Named Desire or Night of the Iguana, but the prints of the other characters do justice to the pictures that I had in my mind as I was reading, with the Maggie print, in particular, standing out for me. The orange-red background evokes flames around our proverbial cat on a hot tin roof, while the strap falling off her shoulder hints at her attempts at seduction we see throughout the play as she tries to have Brick’s child and ensure their inheritance of the Pollitt estate.

Clarice Smith’s style is well-suited for the plays, and this edition benefits greatly from her addition. The prints are also available for individual purchase at the DBS website.

Many people with great skill and years of experience have had a hand in the making of this edition of these plays, and I’m happy to say that the contribution of each has made this greater than the sum of its parts: the ‘interview,’ artwork, design, printing and typesetting of these books have all come together in a singular presentation of Tennessee Williams’ work that any fan of the author, or fan of fine press books in general, would be proud to own and display.

Copies of Tennessee are still available at the DBS website. You can also see The Whole Book Experience for another review of Tennessee.