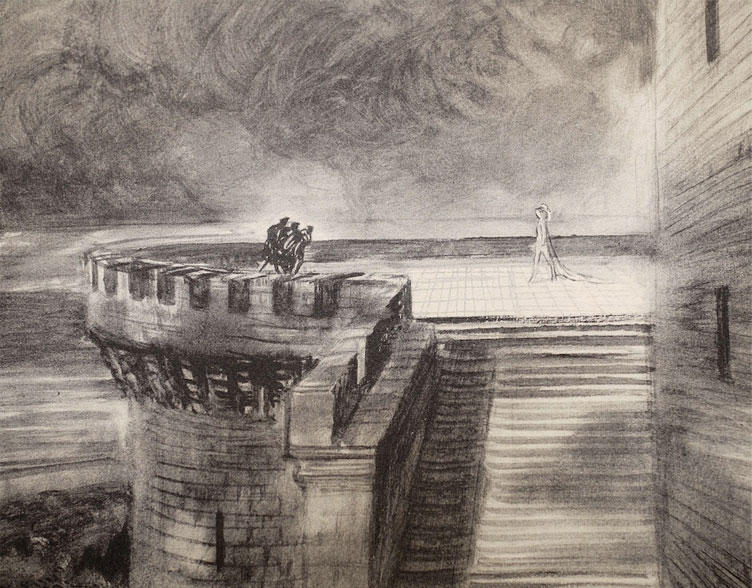 Here’s a look at another volume in the Limited Editions Club Shakespeare, a series that I’ve written about in detail before. All of the books in the series were letterpress printed and published by the Club as part of its Eleventh Series from 1939–1940, titled “The Comedies, Histories, and Tragedies of William Shakespeare.” The set was designed by Bruce Rogers and edited by Herbert Fargeon.

Each of the thirty-seven volumes is folio-sized (8–3/4″ x 13″), bound in gold-stamped half natural buckram with paper sides, printed in four colors and gilded along the top edge to help protect the book against dust and moisture. Published in thirty-seven volumes throughout 1939, each volume was illustrated by a different illustrator, including some of the very best of the day, such as Eric Gill, John Austen, Jean Charlot, Edy Legrand and Arthur Rackham.

This edition of Hamlet was illustrated by French illustrator and painter Edy Legrand (1892–1970); the monthly newsletter had this to say of him:

The illustrations for this edition of Hamlet were made by Edy Legrand, and Edy Legrand is one of the most admired and certainly the most unusual among French illustrators. His drawings could not have been made before this century, yet he is in spirit an illustrator of the nineteenth century, he is one in spririt with Menzel the German and with Doré and Gavarni the Frenchman.

Edy Legrand was born at Bordeaux in France in 1893. He received an intensive education, his early schooling being Geneva, his middle schooling being at the Ecole des Beaux Arts in Paris, and his graduate schooling being in Munich. Not satisfied with so international a training for their son, his parents then sent him traveling in Italy.

When the World War began, he was in the infantry and then later became an aviator.

After the war, he lived for a while in Provence, then began to travel through Holland and Italy and Spain and Northern Africa.

Northern Africa became one of his intense loves. He is now settled there. For the winter, he occupies a house in Morocco; for the summer, he returns to his apartment in Paris.

He has had a tremendous success. He has painted and painted, and his canvasses hang in many of the principal museums. His book and engravings are parts of the collections of most of the important libraries. He has decorated the walls of the French lines, the Normandie and the Ile de France.

Such a tremendous capacity for work is not shared by many modern illustrators. A century ago, the great illustrators Johannot and Gavarni, Daumier and Doré, Menzel and Leloir, considered that they were shirking their tasks if they did not fill the pages of their books with hundreds of pictures. Legrand, as we have said, is one with them in spirit. And it was his enormous collection of illustrations for the tragedies of Shakespeare that caused us to ask him to illustrate Hamlet for us.

His illustrations are done with a dry brush on coarse paper. They have been reproduced in gray and black by Georges Duval in Paris, by the collotype process. These illustrations are spirited, purely illustrational, and include a portrait of Hamlet in which the wild eye and the petulant lip indicated how greatly akin in spirity Legrand is to Shakespeare also!

Photos of the Limited Editions Club Hamlet by Edy Legrand

Click on the photos to see the larger versions. 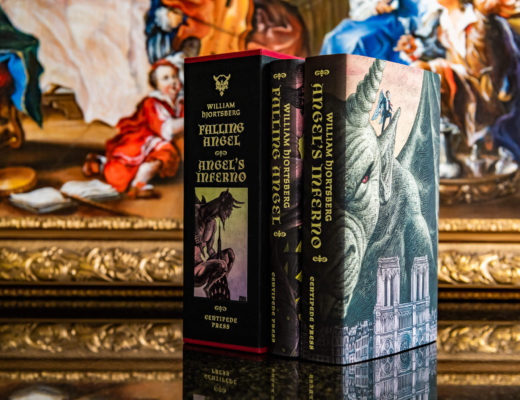